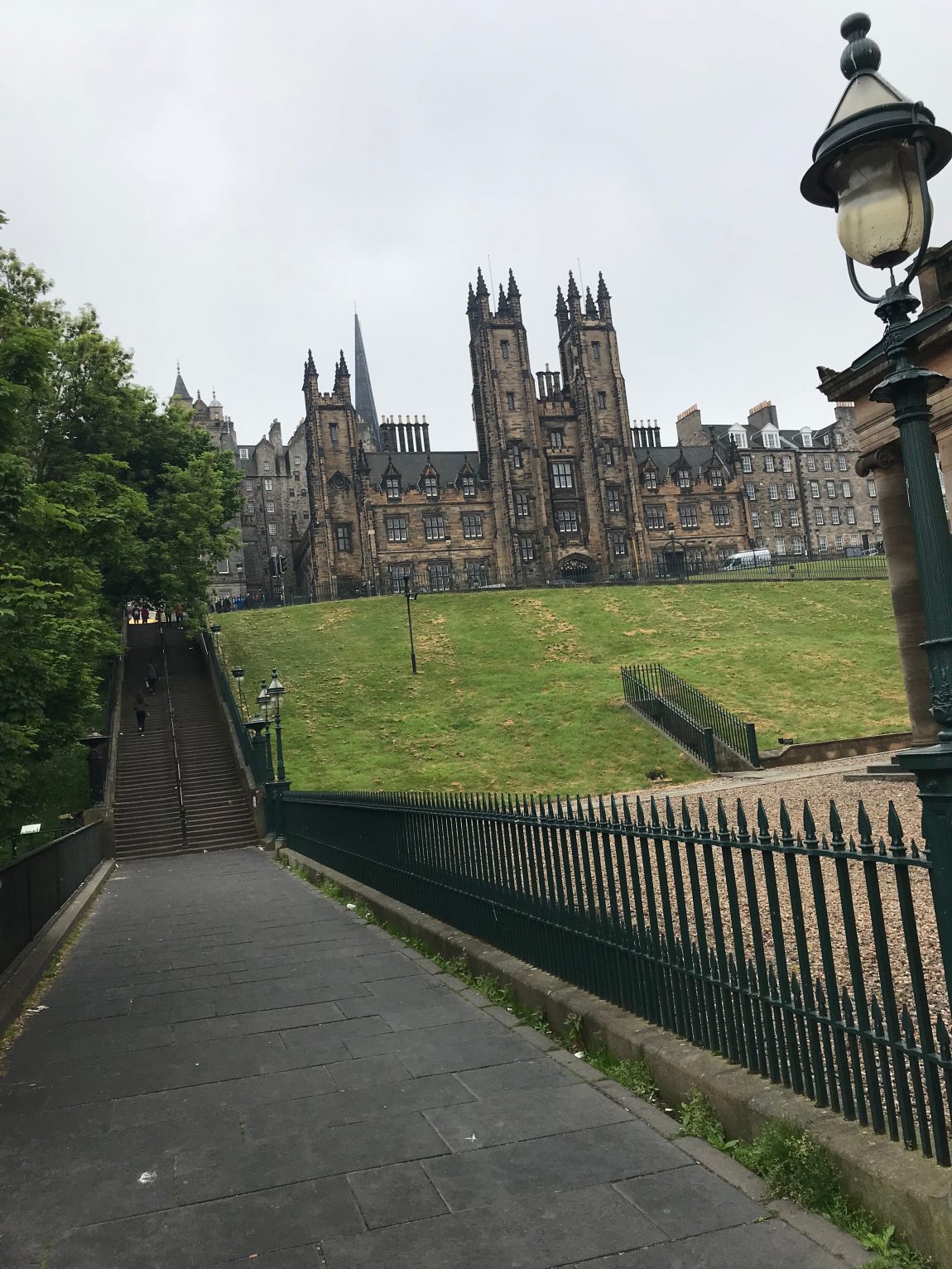 We had been thinking about visiting Edinburgh for a long time. Everyone we had spoken to who had been before had said it’s such an amazing place so this year we decided to go.

We are based in the Midlands in the UK and Edinburgh is around 300 miles away so we looked at flying and driving but they were both pretty expensive. Somebody informed us of a Virgin Trains sale and we managed to get a bargain price of £11.00 return each! We couldn’t believe the price of this!

The journey up north took around 4 hours and it was a really picturesque journey, passing through the Lake District. This for us was the best part of getting the train. We arrived straight into Edinburgh Waverley Station. The station is directly in the centre so makes it a much easier choice than the airport which is located further outside.

We were on a tight budget so we booked a small room at The Place. The hotel was perfect for what we wanted, right in the centre and only a 10-minute walk from the train station. We knew we wouldn’t be spending much time at all in the hotel so we needed something cheap and cheerful with a great location. The hotel was modern, clean and the staff were really friendly.

When we first arrived it was late afternoon so we headed straight to the hotel, checked in and dropped off our bags in our room and then headed straight out. We went to the Royal Mile which is one of Edinburgh’s longest and most famous streets, filled with shops, restaurants and so much to see and do! The Royal Mile connects two of Edinburgh’s biggest attractions, The Edinburgh Castle and Holyrood Palace. 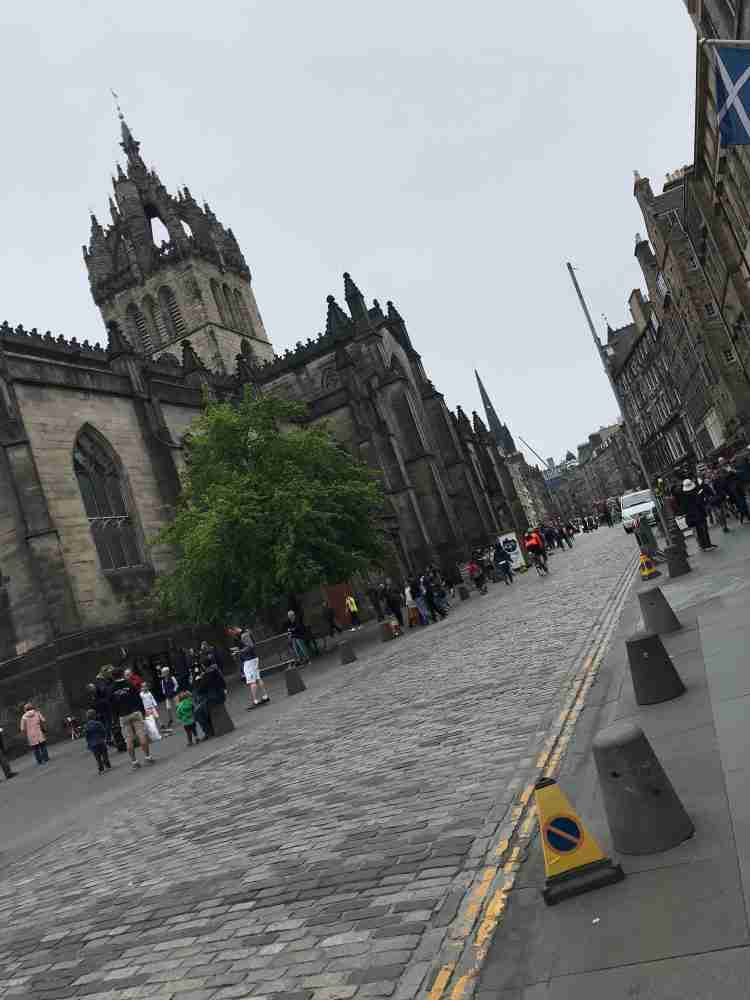 We explored the area and also the old town. Victoria Street was our favourite part. This street is also very famous (apparently J K Rowlings inspiration for Diagonal Alley!) and is Edinburghs most photographed street due to is multicoloured buildings making it look so amazing! As soon as we set eyes on the buildings and the cobbled streets we just knew that Edinburgh was going to be one of our favourite cities. Everywhere you walk there is so much to see, with so many little side streets going off in all directions, it’s hard to know where to look next! 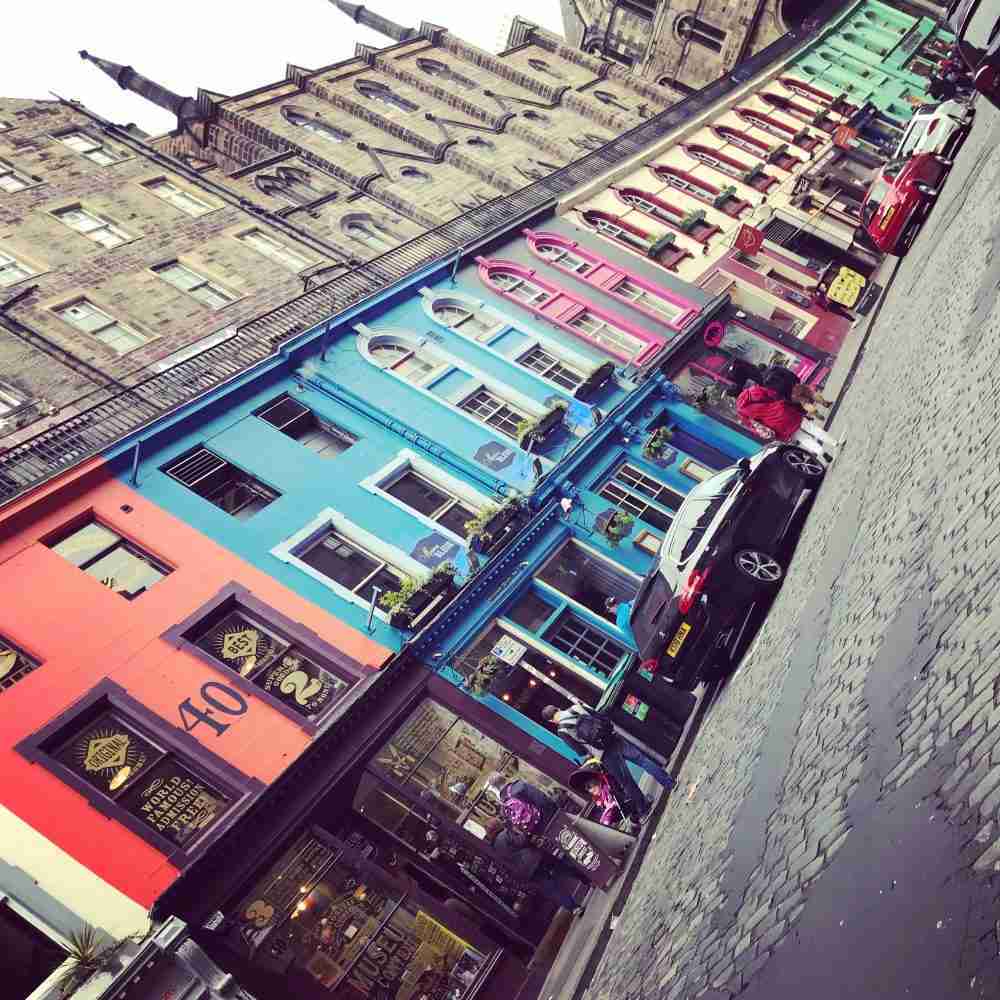 After a couple of hours of just exploring and getting to grips with the new city, we then decided to visit our go-to restaurant, Hard Rock Cafe! 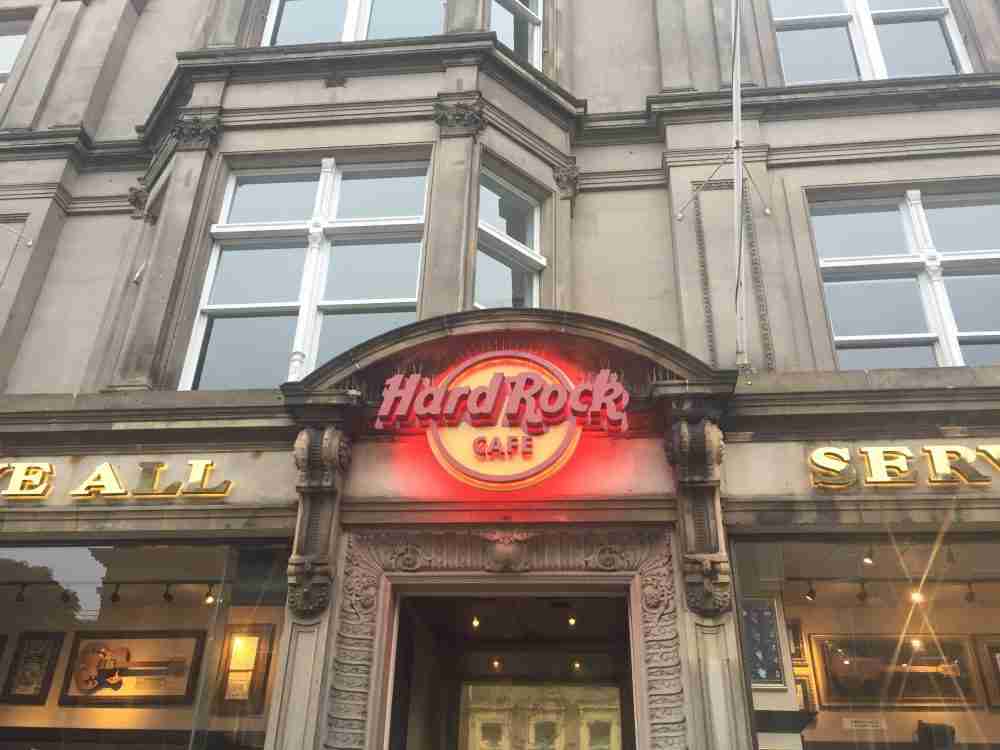 Before visiting Edinburgh we had done lots of research on what the best things to see and do were, and the number 1 thing that kept cropping up was ghost tours, so we decided that was something we definitely had to do. We found that City Explorers ran a free ghost tour every evening at 7:30 pm and 9 pm, meeting on the Royal Mile, so we pre-booked ourselves on. The tour was really great, there were about 30 people in our group and our tour guide was excellent! We found out some really interesting stories, saw a different side to locations that you wouldn’t normally and had a lot of fun. This finished at around 11:30 pm so after a long day of travelling and LOTS of walking we called it a day, ready for another big day of exploring. 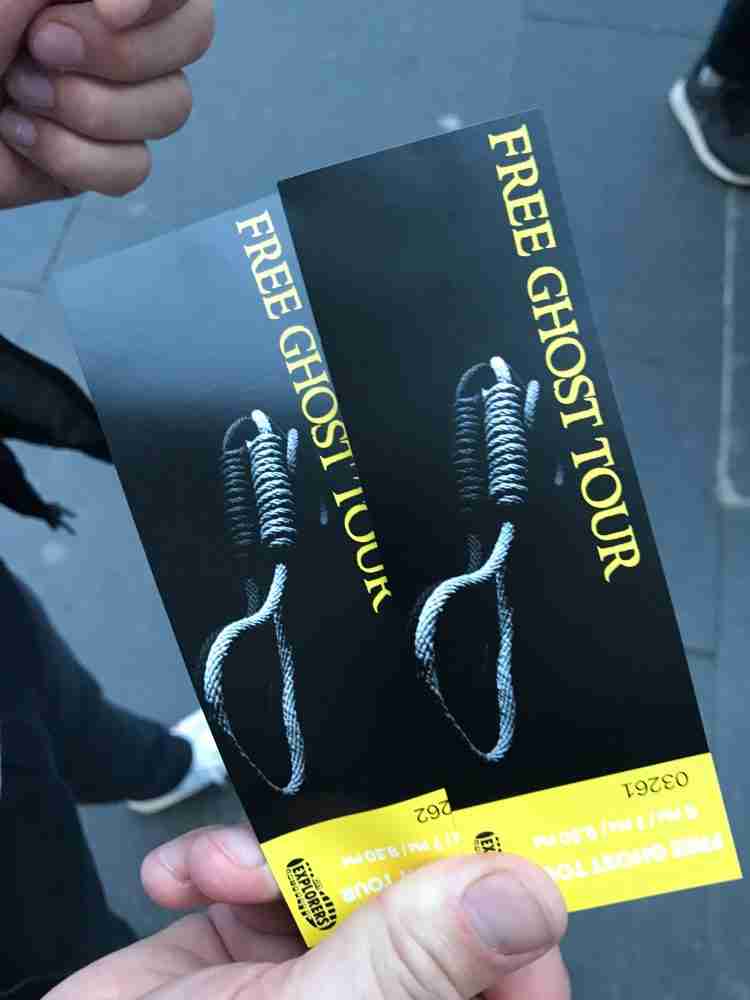 To start off the second day we planned to go to a cafe called Papii for brakfast which was about a 5/10 minute walk from our hotel. When we got there we found it was really busy and crowded so we decided we’d try somewhere else. Right next to Papii is a cafe called Tani Modi So after checking the menu we thought we’d try it out. We were so glad we did! Our breakfast was so delicious! We had savoury croissants, sweet pancakes and some yummy muffins! A big breakfast to set us up ready for another day of exploring. 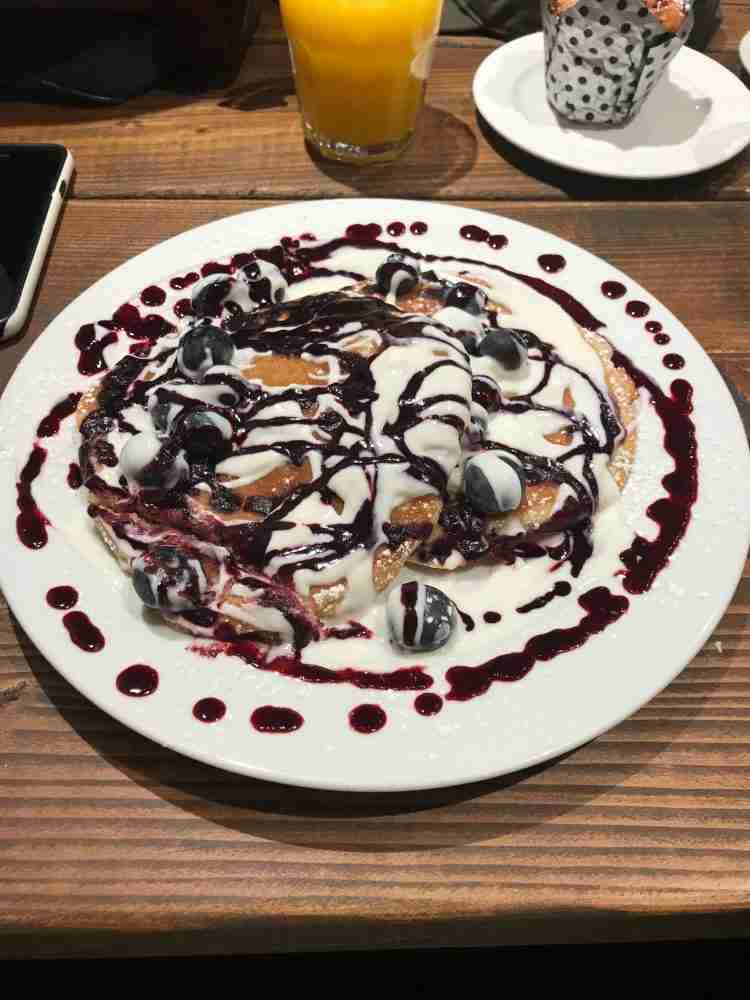 Our first location of the day was Edinburgh Castle. Edinburgh Castle is a historic fortress which sits high above the city on the castle rock, giving amazing views over Edinburgh. This world famous icon is well worth a visit, we spent around 1 hour and a half here, our favourite part was seeing the Queens Crown Jewels!

Next, we headed to Holyrood Palace. The Palace is the official residence of Queen Elizabeth in Edinburgh and home to lots of Scottish Royal history. The Palace is beautiful and it’s so fascinating walking round all of the rooms and learning what history lies within them. You are given an audio guide as you enter and this gives lots of interesting information. 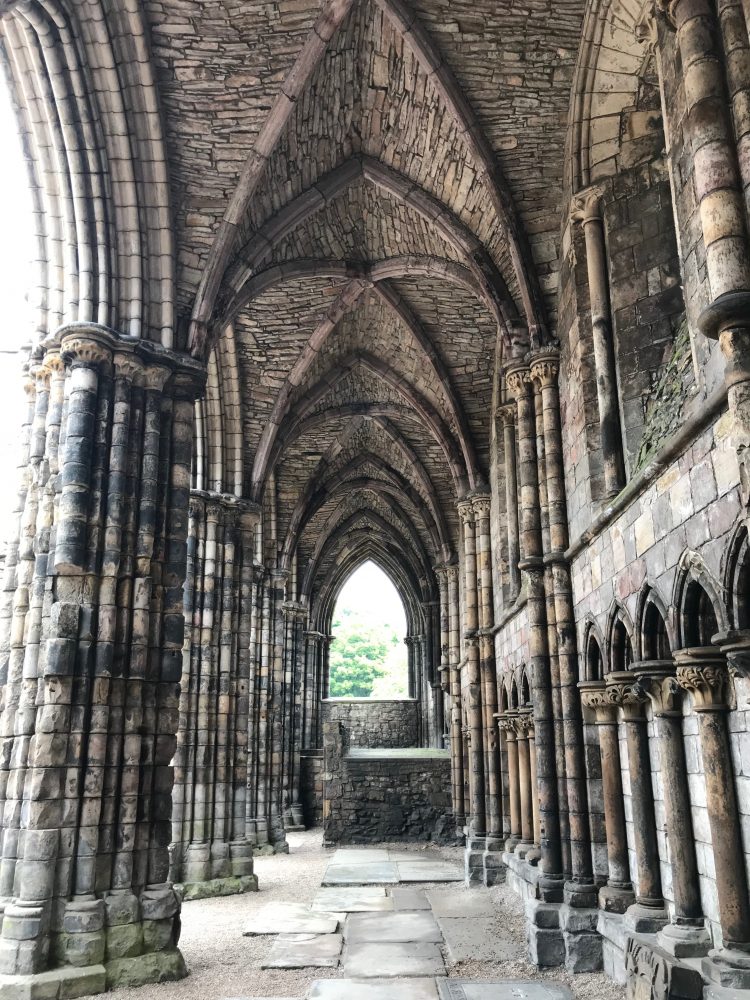 We had planned to climb Arthur’s Seat this day also, which is a peak with unbelievable views of Edinburgh and is right next to Holyrood Palace. We quickly realised as we started walking up towards it that both of us were just way too tired after walking all morning (and not quite dressed appropriately!) so, unfortunately, we decided it wasn’t the right time to go all the way to the top. We would love to go back to Edinburgh again and this will be the number 1 thing to do on our list when we do! We decided we’d dedicate at least half a day to doing this and take a picnic to make the most of it! 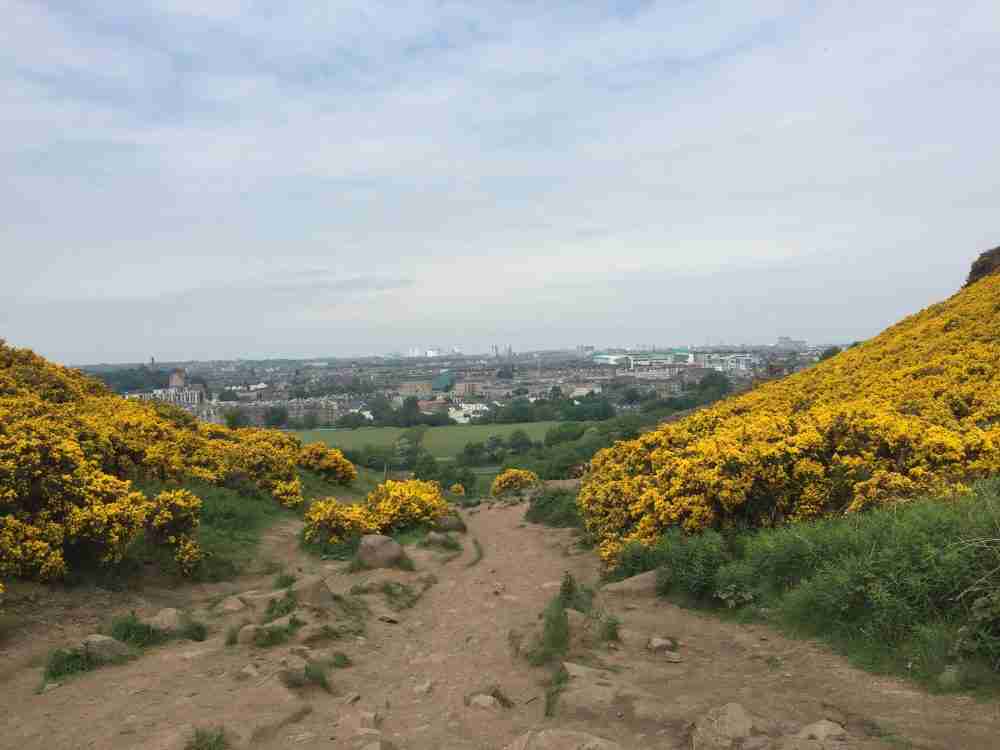 As big Harry Potter fans, we quickly noticed that there is Harry Potter merchandise EVERYWHERE in Edinburgh! As this is JK Rowling’s hometown and the place she wrote the books and got her inspiration. There are Harry Potter tours available but we decided to research into key locations and do our own little tour instead.

We had already ticked off Victoria Street (Diagonal Alley) so next, we headed to The Elephant Cafe. This was one of JK Rowling’s favourite cafes and was where she used to spend time writing the books. If you go here be sure to go into the toilets, the walls are absolutely filled top to bottom with written Harry Potter themed messages!! After the Cafe we headed to Greyfriars Kirkyard which is just around the corner. This is a graveyard (not somewhere you would usually expect to visit on a city break!) which is the home to some of the gravestones which gave inspiration to JK Rowling for names of some of the Harry’s Potter characters, including Tom Riddle! This is well worth a visit and it’s actually really fun walking round trying to find the different names (sounds a little strange I know!!) 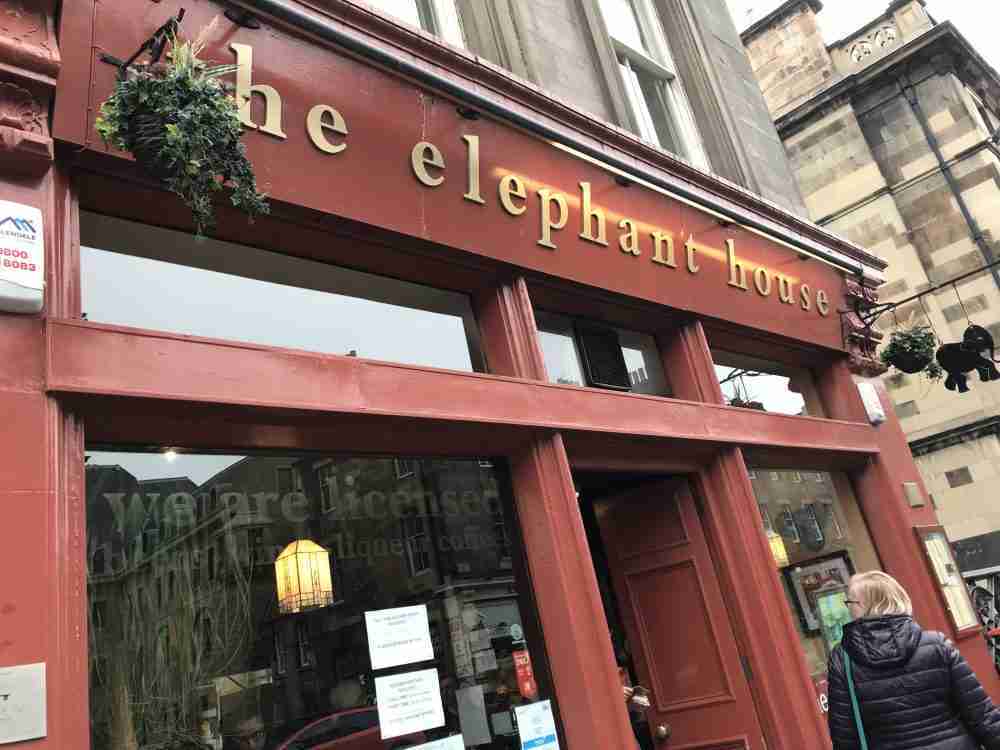 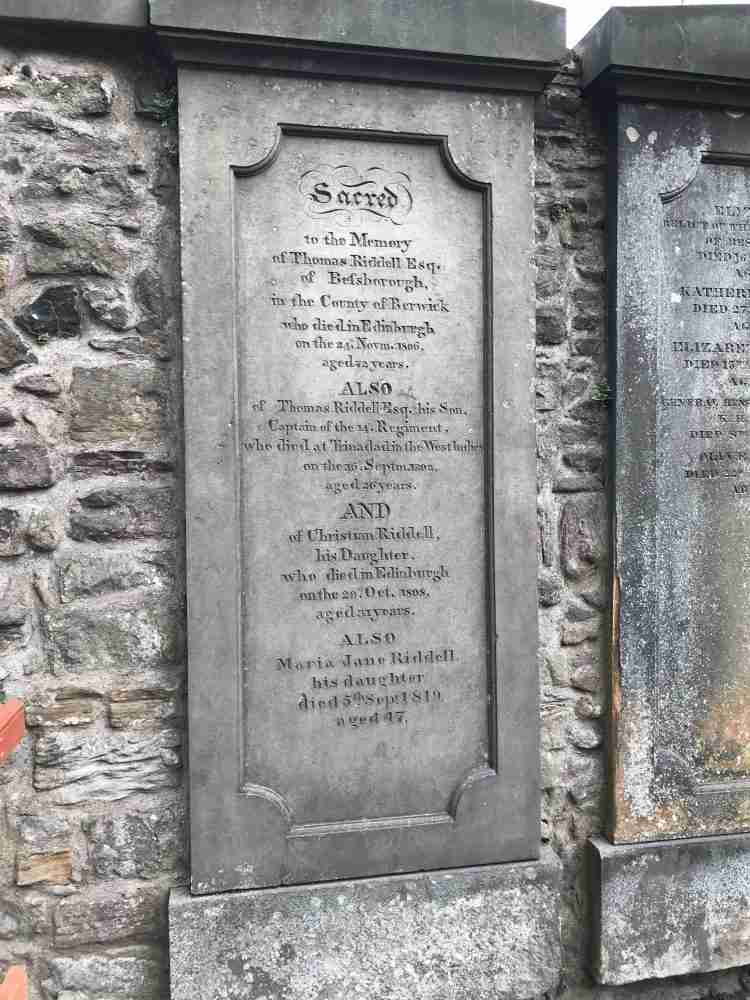 We pre-booked attraction tickets before going to Edinburgh through Visit Britain And bought a ticket which included entry to The Edinburgh Castle, Holyrood Palace, The Royal Yacht Britannia and also hop on hop off bus access for 3 different services. After exploring all morning it was now late afternoon and we had a little bit of time before we were going to dinner so we decided to get the hop on hop off bus Majestic Service and do a full tour around all of the stops to see a little more of the city (and also to rest our feet for a little while!) This was  the perfect way for us to have a rest but see more of the city we hadn’t already seen.

The round tour took around 75 minutes and filled our time perfectly before we headed to an Indian restaurant called Dishoom for some dinner. We had been to this restaurant previously in London and enjoyed it sooo much that when we found out there was one in Edinburgh too we knew we just had to go! And it did not disappoint, the food here is unbelievably tasty.

Before we visited Edinburgh we researched into what there was to do and found that our hotel was a 5-minute walk from the Edinburgh Playhouse. We decided to see if there were any shows on that we might like to see and were so happy when we found that Wicked would be on when we were there and knew we had to book it! The show was fantastic, one of the best ones we have seen and was the most perfect way to spend our final evening! 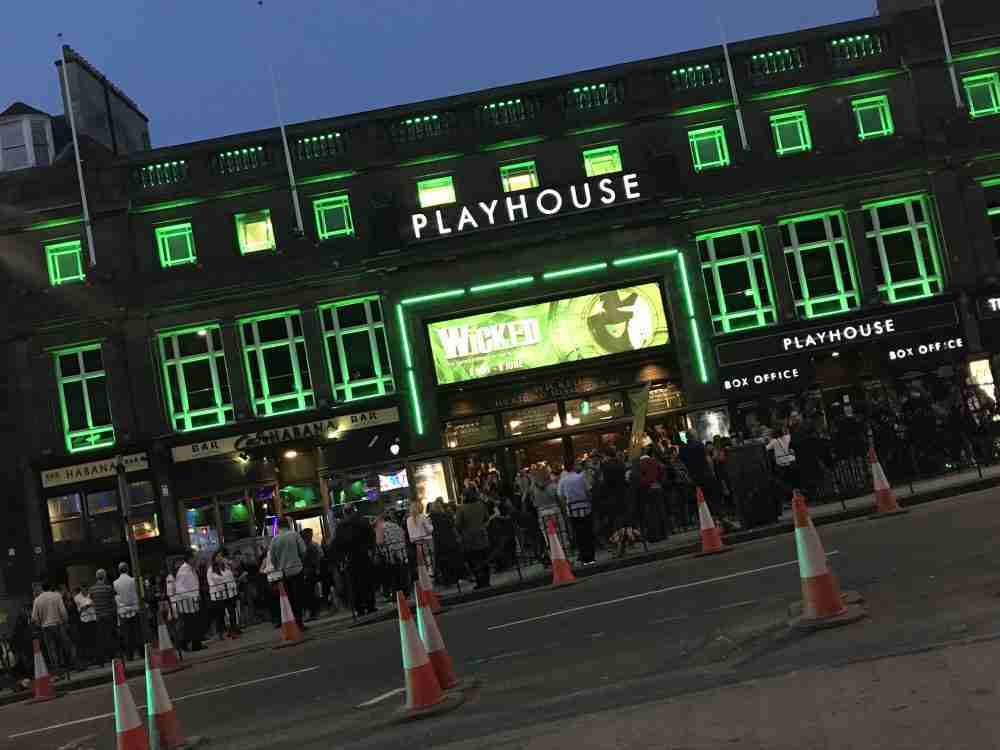 On our last morning in Edinburgh, we decided we would go somewhere nice for breakfast and then head to our final attraction on our list which was the Royal Yacht Britannia before we caught the train home in the afternoon. The Yacht was a little further out from our hotel in an area called Leith so we decided we would have breakfast somewhere in that area. After researching we came across a cafe called Mimi’s Bakehouse and after looking at photos of the food and their menu this was a definite to go to!!! If you’re anything like us and have a sweet tooth you will LOVE this place. We had French toast with Biscoff, banana and vanilla and it was the most naughty but nice amazing French toast we have ever eaten! After checking out the bakery counter which was just too good to resist we also took a couple of treats away with us for the long train journey home. 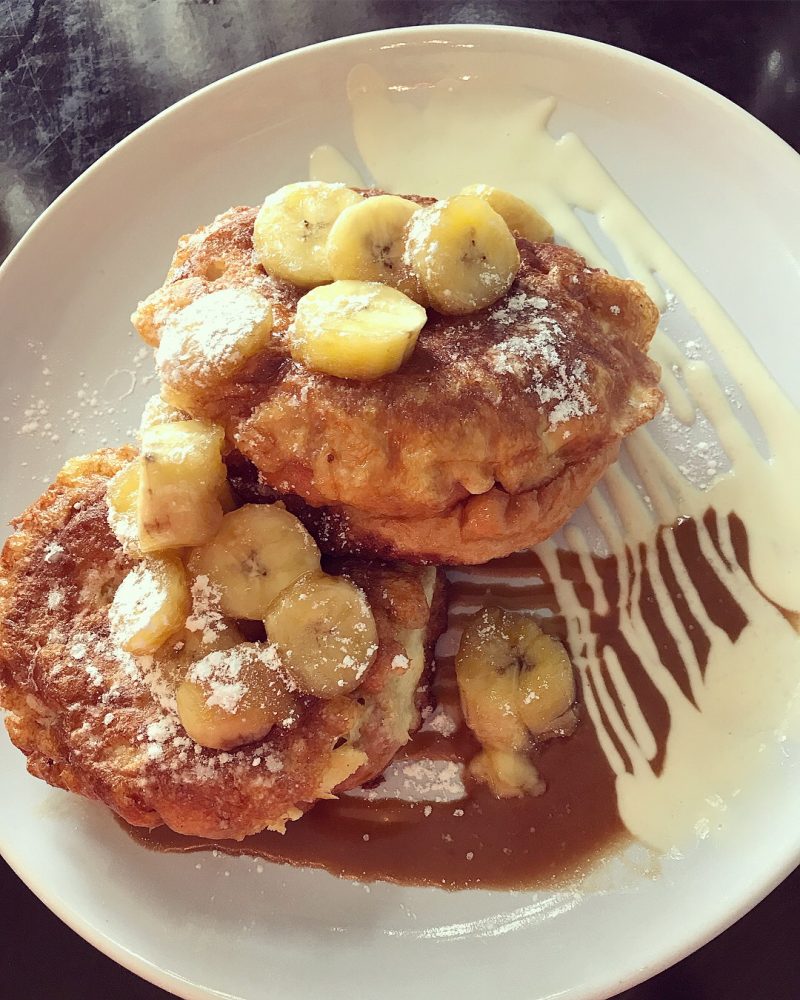 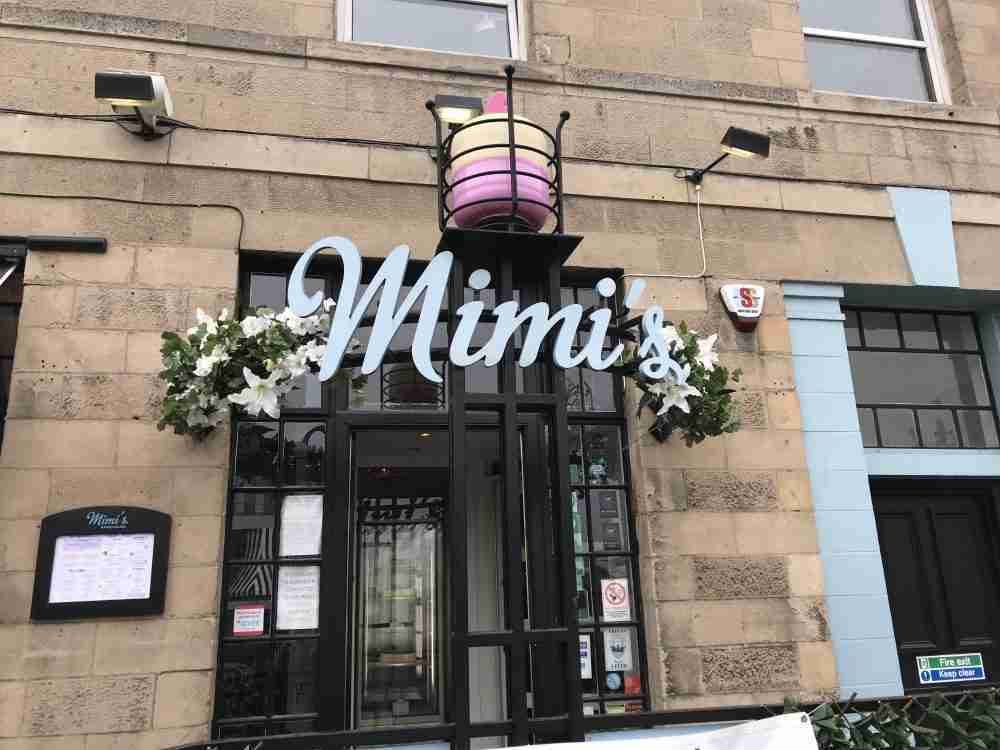 We then walked to the Yacht which was about a 10-minute walk from the bakehouse. The Royal Yacht Britannia is the Yacht belonging to the Royal Family. Before entering the Yacht you head through an exhibition giving lots of interesting information and photos. We absolutely loved this attraction and feel it was our favourite. The Yacht is stunning and holds so much history, it’s fascinating walking around it and thinking you’re in the same place as the Royal Family! After spending a couple of hours on the Yacht it was, unfortunately, time for us to head back to our hotel to pick up all of our luggage and head to the train station to catch the train home and end our lovely trip. 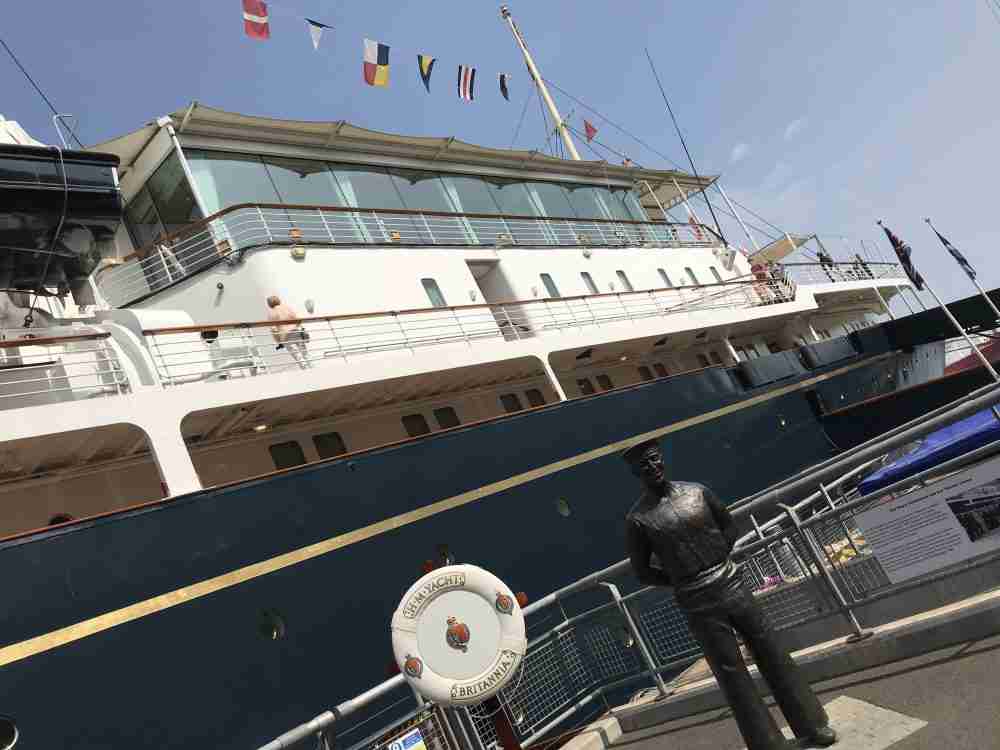 We would highly recommend Edinburgh to anybody considering going. This beautiful Scottish city stole our hearts and we just can’t wait to visit again .. 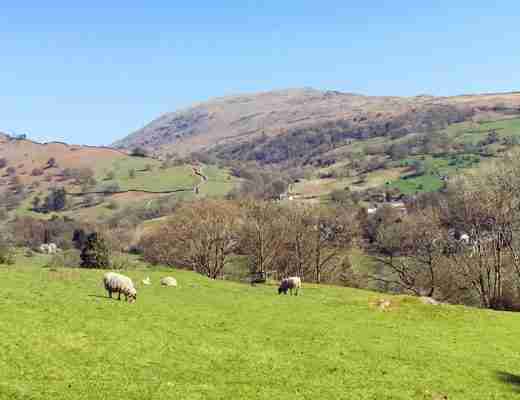 How to spend a weekend in The Lake District 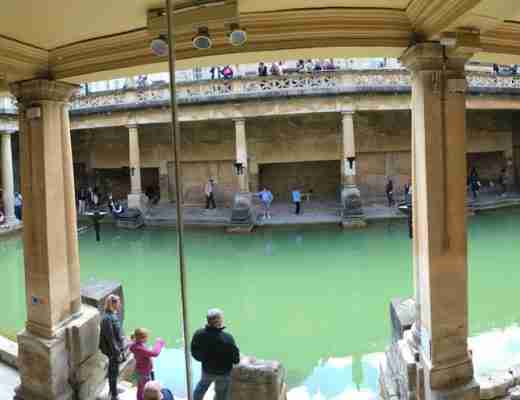 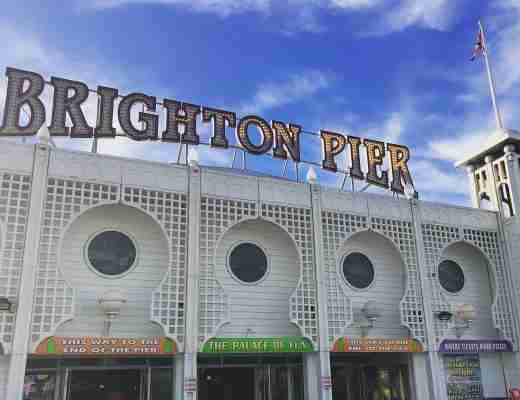 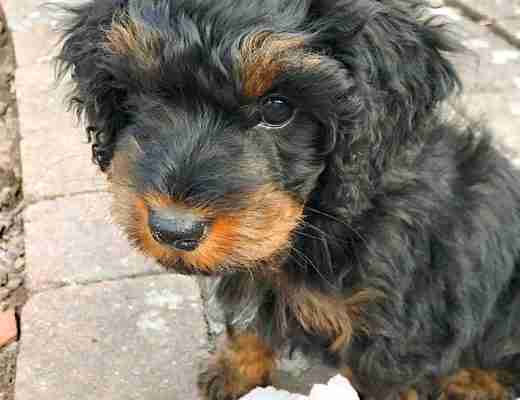 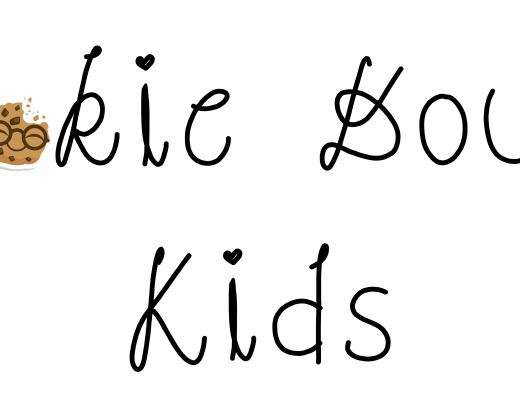 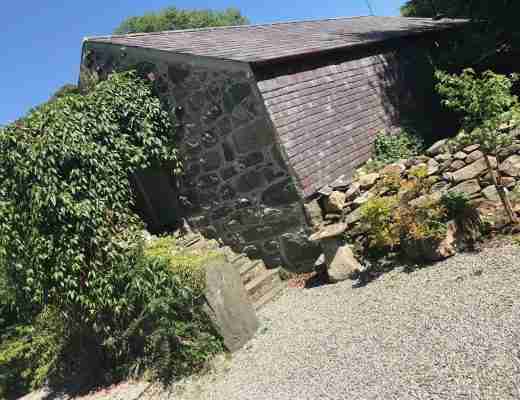 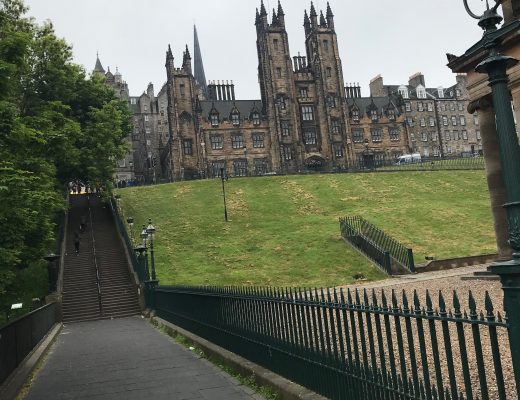 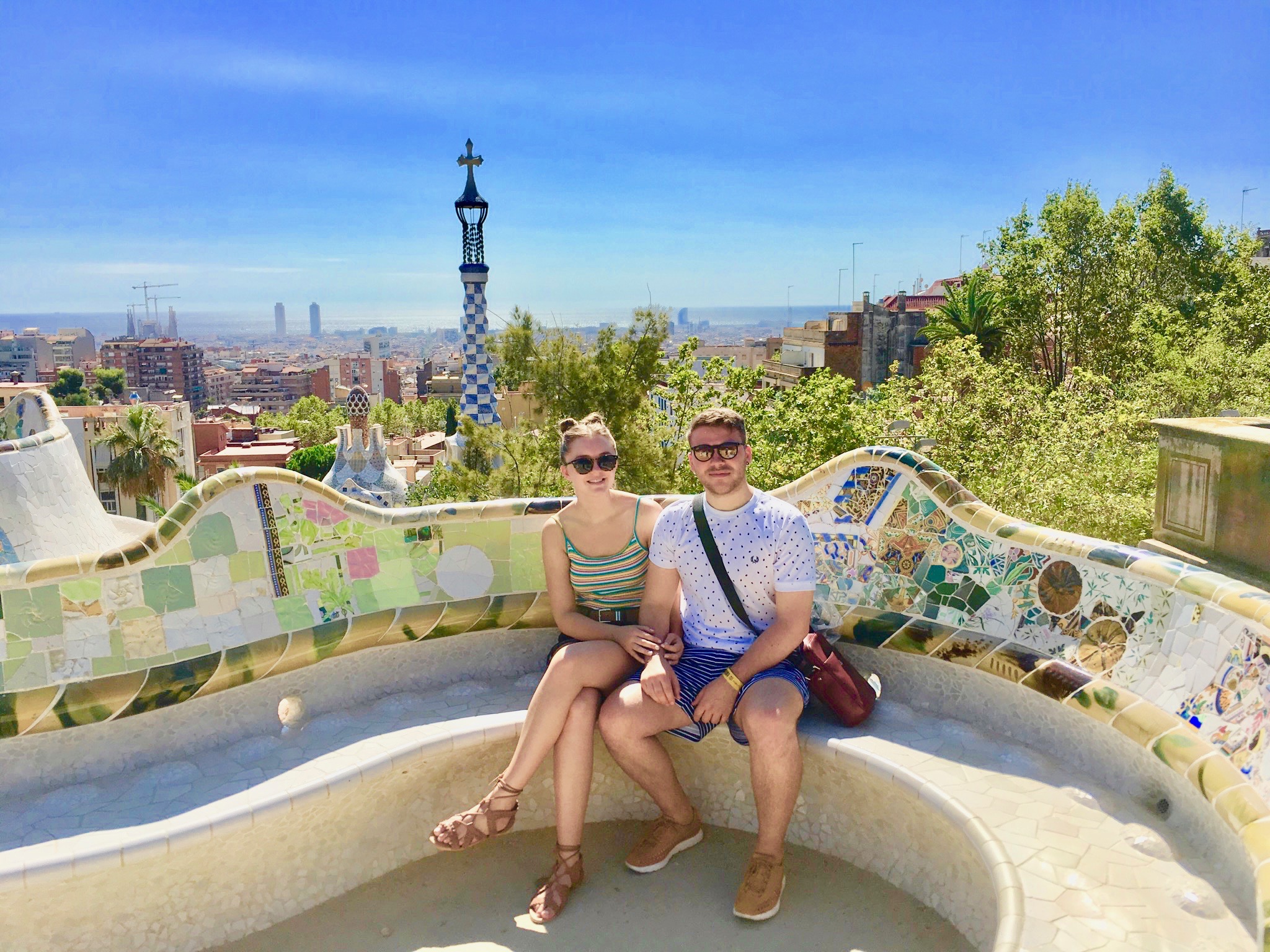